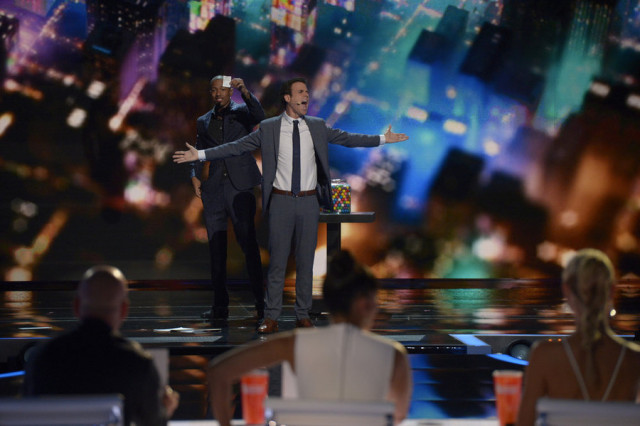 This year’s America’s Got Talent one and only wildcard is the most disappointing thing since the “The Last Airbender” movie. What kind of a opening is that, you ask? Well let’s take a closer look at the talent this week and discuss, shall we?

Hey everyone, it’s Adam, here again with my pre-show rankings. Finally, we are getting down to the wire, and with only 22 acts remaining, not only are my favorites dropping like flies, but new frontrunners are emerging (and regurgitating… ew). Granted, while some cuts have left my stomach turning, as a whole this top 22 is really solid, with some exceptions of course. My number two favorite in Freckled Sky is gone, so while my only remaining hope of my top favorites in Piff is fading quickly, for me it is leaving this win open to numerous acts to take it. For me, as much as it stung to lose Freckled Sky in favor of a puppet (WHAT THE F***), having this season so wide open is what is making the show so gosh darn entertaining for me. Personally, at this point I think it will come down to Paul, Freelusion, Oz and Piff if he somehow can regain his magic (#seewhatididthere), but there are quite a few others who easily could still take the win. Anyway, let’s take a look at the acts performing this week.

11- Ira– The fact that he is still here and Freckled Sky is eliminated just blows my mind. I never knew he had so many fans, especially when it came to that product-placement save. His act appeals to little kids, and unless you are dumber then Howie Mandel, you should see he is really just another Lazaro Arbos in disguise as a puppet. Wait a second…, we never saw who Ira’s puppeteer is. Have we ever seen Lazaro Arbos and Ira in the same room together? Coincidence? I think not. Hopefully this week his time has come.

10- Metal Mulisha Fitz Army– Personally, the fact that this freestyle motocross team  are the one and only wildcard this year is one of the most offensive things of the season (only topped by Howie’s bulimic comment). What these guys returning means is that first, the wildcard was foremost intended solely to be given to a fodder act, and second to show that the producers are really the one’s deciding everything (was there really ever any doubt though). If I was Freckled Sky, DM Nation or that bearded comedian sitting at home I would be so ticked off, and with good reason. They were fodder before and they are fodder again. NEXT.

9- Derek Hughes– I just don’t get why people are liking this guy so much. His magic tricks are okay, but I just find his whole character off-putting and even a bit annoying. With Oz performing tonight, I’d bet he will drastically outperform Derek, sending him home.

8- Samantha Johnson – Whelp, if a pimp spot and standing ovation after nailing “Lay Me Down” didn’t keep this accomplished singer/actress safe last time she performed, I doubt she will be this week when there are much better performers. This is a shame, cause I really like her voice.

7- The CraigLewis Band– I don’t know why, but I just can’t get aboard this soul duo’s train. Yes they are good singers but is that it? I feel like I barely know anything about them and I just can’t bring myself to care or support them. They sing ok, I have heard much better on idol, and I just find them generic and almost boring. People like them though, so I don’t know.

6- Arielle Baril – I am really digging Arielle’s voice! I actually think the 12 year old opera singer improved from her already strong audition in her last performance. With 5 acts moving on, I think it will be tough for her to advance, but I think she definitely has a shot should another act falter.

5- Mountain Faith Band– I kinda have a thing for the lead singer of this bluegrass band. Last time they performed and I saw them live I was hooked from the first note. I love these guys and I will be voting and rooting for them this Tuesday. For those who have been pointing out the singer’s sometimes wobbly vocals, I just want to point out that the hook of these guys is their amazing arraignments of modern pop songs! It’s all about creativity people!

4- Benton Blount– WGWG is typically solid. His vocals and emotion have been solid enough to gather him a following that will vote for him. I don’t mind his covers, and I think he has been doing a pretty great job.

3- Siro-A– This visual dance group has delivered every time we have seen them. With their momentum building, if they can live up to their hype they should be fine.

2- Drew Lynch– This week should be easy for Drew, as he has no competition in his category. America loves this guy, the comedian who tells jokes despite a debilitating stutter, so unless he has a disaster I expect him to sail right on.

1- Oz Pearlman– Next to Piff (if he can redeem himself) Oz is the best magician/mentalist this season. He has stepped it up every time he has performed and I have throughly enjoyed him each time. I can’t wait to see what he does next.

So those are my rankings, what are yours? Sound off in the comments! As always, if you liked what you read and you want to show your appreciation, you can follow me on Twitter at @adamhsamuel.

Thanks for reading guys, and I’ll see you here on Tuesday for the live recap of the performance show!