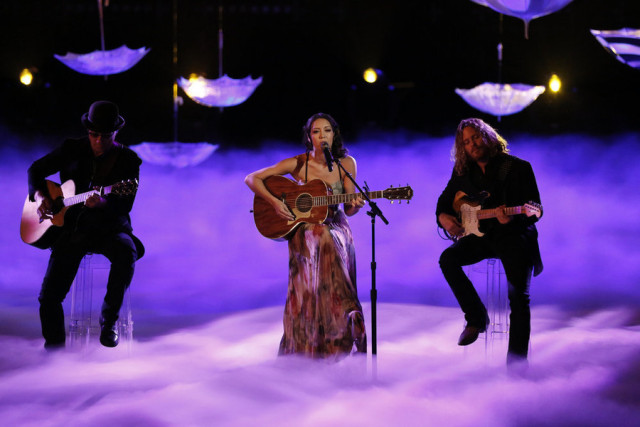 Tonight, the 10 remaining members of Team Blake Shelton, Team Adam Levine, Team Gwen Stefani and Team Pharrell Williams perform for YOUR votes! Click for Voting Rules. No phone. No texting. Online voting only at NBC.com, The Voice Facebook or via The Voice smartphone app. And of course, iTunes downloads count as votes!. Don’t download until 10 pm ET! Voting during the show ONLY on the smartphone app. Click for tonight’s Top 9 Song Spoilers.

Tonight’s performances are particularly crucial. FIVE singers will leave the competition tomorrow! Only three will automatically be safe. The 4th, 5th and 6th place vote getters will perform for the insta-save, and we will immediately say goodbye to THREE singers.

The stakes are SO high tonight. Will the singers be able to handle the immense pressure they must be feeling? Settle in with us for what could be a drama filled night of performances.

Carson congratulates the coaches on their Grammy noms today.

Barrett Baber – Team Blake –  Ghost by Ella Henderson – Blake thinks Barrett should swing for the fences!!! So why not take a pop hit his core audience has probably never heard and flip it?  Oh. He’s throwing in some plane crash survivor backstory. That should help. Blake suggests adding some gospel flavor to Barrett’s swampy arrangement. It starts off really churchy, and then abruptly switches to this weird CCR-like swamp thing. Nah. This isn’t working for me.  Let’s throw everything including the kitchen sink into this arrangement. Parts of the chorus are out of his lower range.  The song ends as a big gospel rave, with a choir, which helps, and MIGHT save him. But, that was a hot mess.  Pharrell compliments him on being tapped into deep emotions. Gwen calls it “a really powerful performance.”  Adam calls him one of the strongest singers. He’s applauding him on a “cool interesting choice.”  Blake wants to get started on next week’s song, that’s how strongly he feels about his performance. – Download from iTunes

Shelby Brown – Team Adam – Even God Must Get the Blues by Jo Dee Messina – It’s one of Shelby’s favorite songs. She’s worried viewers won’t know it. Obviously, she chose it. She’s frustrated with her timing problems. Confidence is a problem, she admits.  An old song, but it touches on troubled times which is a smart nod to current events.  This is a strong vocal. If she was performing later in the broadcast, she’d have an excellent chance to make the middle 3.  This will give her a shot at least. It will be interesting to see where she lands on iTunes this week. Big emotional ballads are her strength. Too bad there were some tuning issues. Blake thinks she sounded amazing tonight. Perfectly in time and in tune, says Blake. Well, not exactly.  Pharrell can’t understand why she’s nervous! She connected to the moment so well, he says.  Her “understated” performance was Gwen’s favorite. Adam admits that Shelby has driven him crazy. “The feeling is mutual!” she quips.  Adam declares that Shelby deserves to be voted through to the finale. What, Adam, do you really think  all 3 of your singers can advance to the finals? Lip service.  –  Download from iTunes

Jeffery Austin – Team Gwen – Believe by Cher – Jeffery is “excited and terrified” to cover Cher. “It almost becomes like an Elton John song!” Gwen enthuses about Jeffery’s slowed-up rendition of the song. She suggests that he “get real” with his face. This is a beautiful performance. I hope the folks at home getting ready to cast their votes appreciate it.  Jeffery’s phrasing and his tone is EXQUISITE.  The last chorus is powerful. I wasn’t crazy about this song choice, but Jeffery is leaving every bit of himself on that stage. I’m voting so hard for Jeffery tonight. Blake says he just absolutely proved he deserved “to be in the freaking finale.” He predicts a #1 iTunes.  Gwen begs the folks at home to vote. SO AM I.  That performance should AT LEAST get him into the middle 3.  – Download from iTunes

The stars of “Telenovela” are in the house. Eva Longoria and some other dude. They do a bit where they offer to perform. The joke is that Eva can’t sing. Probably a bit right out of the show, which is premiering after The Voice. Pointless.

Ellie Goulding takes the stage to sing her latest single, “On My Mind.”  She has the goofiest dance moves. Also, I’m used to seeing her in short shorts. Tonight Ellie is dressed in black and grey from head to toe.

Braiden Sunshine – Team Gwen –  Amazing Grace – Blake and Gwen high five. That’s at least 5 paragraphs for E! News, later. She suggests something emotional for this week. Braiden loves the song choice. “I got saved. I’m here,” Braiden. The song is a little deeper than that. Braiden tears up as he talks about wanting to make the finale. Braiden reveals that his voice has been changing over the course of the competition. “He’s a star now,” says Gwen. He confides that he’s “emotionally falling apart.” Gwen gives him a pep talk. Amazing Grace. At 15 years old, he’s had so much opportunity to lose himself on an unfortunate path.  It’s a sweet performance, but he doesn’t have the life experience to dig deep. He’s been singing so horribly all season, I’m afraid he may be “saving” his own ass with this song pick. He has pulled the God card and is delivering a credible rendition of a beloved song. He breaks out the tears. I would say, he’s got a shot now. Adam feels he proved to the audience that he could sing anything. Pharrell believes he’s giving so much hope to young kids. Gwen loves his tone and spirituality. “VOTE FOR THIS GUY” she says.  –  Download from iTunes

Zach Seabaugh – Team Blake – The Climb by Miley Cyrus – “Team Blake’s teen heartthrob” is how Carson describes Zach.  He calls “The Climb” Zach’s “theme song.” He was having fun last week, but the singer is dead serious this week. He wants to deliver an “important” message. Blake advises he “George Strait” it.  Zach has got that scrunched-up-furrowed-brow “I’M SO SINCERE” face going. It was smart to keep him still with a guitar this week. This is one of his best vocals, although he thins out on the big notes. He’s staying in tune, which has been problematic for him previously.  The song ends with big background vocals on the track. Damn. Zach has a shot too, I think. “Why am I not in high school!” gushes Gwen. She wants to tape his photo in her locker. Shut up, Gwen. She has a feeling that he’s going through for sure. Adam is SO proud of everybody! Blake calls it his best performance of the entire season “Perfect timing, man!” Blake says. –  Download from iTunes

Madi Davis – Team Pharrell – Big Girls Don’t Cry by Four Seasons  – It’s one of Madi’s favorite songs to sing. She loves how light hearted it is. Pharrell loves the song choice! Hm. We’ll see. The Voice is teaching her how to collaborate, Madi reveals.  He’s putting 3 part harmony behind her “like little birds.” Uhm. Oh, there is an accordion. Shades of Joey Cook. This would have been adorable earlier in the season. But right now? Is this the thing that will catapult her past a slew of her fellow singers and into the final? Madi’s attitude seems to be: “I’m an artist, I’m going to sing what feels right, even if it costs me.” Her phrasing is cool and fun and different. Not sure the folks at home are going to get it. She’s trading licks with the accordion player. It’s really kind of a bat-shit performance, in the best way, albeit some uneven moments.  Also, not flipping the gender might turn off some people.  She performed near the end of the lineup. Maybe that will help her. Adam calls it romantic, beautiful and different. Blake felt like he was watching a Disney movie “It was too perfect to be live!” Pharrell is standing up he’s so excited. “The production was amazing! You’re ready for Broadway or film.”  He begs America to vote Madi through.   –  Download from iTunes

Emily Ann Roberts – Team Blake – 9 to 5 by Dolly Parton –  Emily talks as if Dolly is going to mentor her. But then. No Dolly. I wonder what happened to that?  Emily’s dad broke his back and was supposed to never walk again…and then he did! Blake checks to make sure she’s wearing cowboy boots. Emily does sass pretty well. She’s way too young to sing these lyrics, but she’s selling it as a fun song. She seems to be enjoying herself up there. She’s loosened up some since the beginning of the season, although she’s a little breathless toward the end.  Still think an old-school Dolly song would have served her better at this point, but we’ll see. Emily seems to have people, so there’s that. Gwen doesn’t understand how she can sing so perfect. She loves Emily’s spunk. Blake says he’d sign her if he owned a record company. “You’re going to make somebody so much money…YOU HAVE TO BE GOING TO THE FINALE,” he says.  –  Download from iTunes

Amy Vachal – Team Adam – To Make You Feel My Love by Bob Dylan  –  Amy becomes teary reminiscing about her The Voice journey. She chose a song that is straight from her heart. Adam thinks she’ll succeed having an emotional, raw moment. He name checks Nora Jones’ cover of the song. Her performances so far have felt slight. But she sounds sturdier than usual tonight. Keeping the arrangement simple and quiet is smart. It’s definitely her most heartfelt delivery in the competition. Her voice breaks up in the end, and for once her performance feels substantive.  Amy just secured a spot in the Top 3 with this performance. “Spread love, that’s the Brooklyn way,” says Pharrell.  Adam notes how the room completely froze as she sang.  –  Download from iTunes

Jordan Smith – Team Adam – Somebody to Love by Queen – Adam thinks they’ve earned a week to “branch out” in other words “It doesn’t matter what you sing. Let’s go crazy!”  They’re bringing in a gospel choir.  Jordan gets a giant frigging choir. They don’t even wait until the last verse! Jordan delivers a full-throated rendition of “Somebody to Love.” He’s giving it everything he’s got. Hits those major high notes. He should just drop the mic and walk off the stage now. He doesn’t even need to finish. Yep. There’s the BIG LONG NOTE. And the run-er-ific growly, high note hitting last note. No really, he should just drop the mic and have a drink. Relax, kid. Watch everyone else scramble. You’ve got this. Adam is screaming. YEAH YEAH YEAH. Why bother with coaches reactions? Adam runs up to hug him. He calls it the best thing he’s ever seen in his life. And we’re out.   –  Download from iTunes