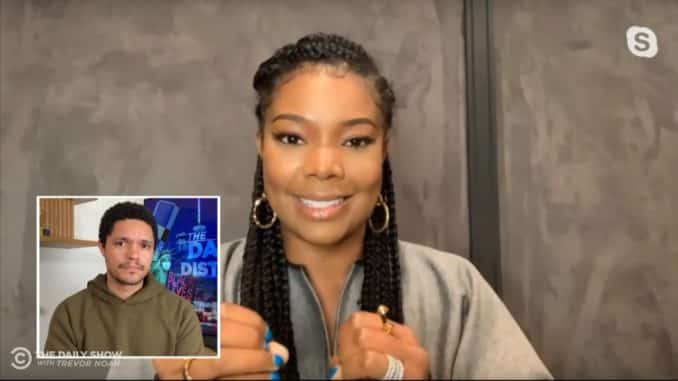 Gabrielle Union had an in depth chat with Trevor Noah on The Daily Show recently about fighting racism in Hollywood. Specifically, she shared her thoughts on her experience as a judge on America’s Got Talent and her battles with Simon Cowell, producers and NBC.

From production saying her hair was “too black” to guest stars telling racist jokes, to executive producer and fellow judge Simon Cowell smoking indoors without consideration of the people who worked for him, Gabrielle spoke up about the problems she saw. As a result, the powers that be didn’t pick up her option for a second season. When publications reported the behind the scenes issues in a series of reports, NBC announced they would be investigating Gabrielle’s allegations. The conclusion of the investigation, however, was more or less “nothing to see here…and that Gabrielle sure can be a troublemaker.” Needless to say, the actress was unhappy. In turn, she’ filed a complaint with California’s Department of Fair Employment and Housing, charging that NBC chief Paul Telegdy threatened her.

In the interview, Gabrielle compared Simon Cowell’s arrogance to Amy Cooper, the woman who called the police on a black birder in Central Park.

“Amy Cooper did not believe that the rules and laws applied to her,” said Gabrielle, “and she believed that in her wrongness, she would be able to weaponize the police against the black man.”

Simon Cowell doesn’t believe that rules apply to him

“So along this spectrum, we all live within the spectrum, right?” Gabrielle explained: “Day one. You know Simon Cowell is is smoking cigarettes inside. When your boss the person who has the ability to determine who gets opportunities and who doesn’t believe that the law applies to him or the rules applied to him. And he does it in full view of NBC and Fremantle. And no one cares about Simon Cowell exposing all of these employees to secondhand smoke. What message do you think that sends to anyone that has an issue with the very real racism and the lack of accountability.”

Gabrielle participated in NBC’s investigation, under the impression it was truly independent:  “Well, silly me,” she said. “I thought independent was independent. Gabrielle continued: “but when NBC and Fremantle and SYCO pay for that investigation, they control it. So throughout that investigation, being in there for five and a half hours, my goal is change. I’m about labor treating employees fairly. Nobody’s asking for anything special. Nobody’s asking for somebody to separate their Skittles or their M&M’s or whatever. Just treat people fairly, have mechanisms in place for when things happen, there are consequences.”

Gabby accuses NBC of weaponizing the investigation against her: “They turn over what they believed to be inflammatory things that are not advantageous to me over to the head of NBC Paul Telegdy who then uses those things that he thinks are are smoking guns to like shoot down my claims. He then threatens my agent ‘Gabrielle better watch who she calls a racist’ in the middle of an investigation about racism and discrimination? This is what’s happening from the top of the company.  We have to hold the people at the very top accountable.”

Gabby believes there has to be an increase in representation across the board: “From the top to the bottom. who gets to make the decisions of which projects to green-light. Who is a part of those development process. Who gets to determine budgets. Who gets to determine who gets opportunities and why.” Also, she believes Human Resource departments have to be empowered to actually hold people accountable.

“We have to be okay with change that doesn’t always benefit us,” said Gabrielle. “I’m learning throughout this whole process [that] sometimes the best way to lead is to get out of the way and make room for someone else. You have to dismantle the whole thing. You can’t put a Band-Aid on a gun shot. We can’t.”

Watch Gabrielle Union’s interview on The Daily Show below.