Allison Iraheta will take part in a live chat sponsored by Tone skin products, part of their emerging artists series, on January 26 at 6 pm ET. More details can be found at the Tone Facebook page.

Elton John Reveals What He Would Have Changed About ‘American Idol’

” ‘X Factor’ is going to be a huge show, ” John said. “It’s going to be huge, because you can have bands on there, and that’s one thing I wanted to change, if I had been on ‘American Idol, ‘ ” he revealed. “Get away from the solo stuff. Let’s have bands, let’s have writers, let’s have songwriters, let’s change the format a little, and that’s why ‘X Factor’ is going to do so well, because it’s a different lineup. You can have bands and groups. That’s more interesting I think.”

In October Mr. Jackson left his position as executive vice president for A&R at Sony’s RCA Music Group after a falling-out with Barry Weiss, the RCA chief executive who last month was signed by Universal to a top job that has not been specified. Mr. Weiss is to start that job after his contract with Sony ends in April.

At Interscope, Mr. Jackson will work under Jimmy Iovine, Interscope’s chairman, who recently took on an additional public role as an in-house talent coach on Fox’s “American Idol.” Another top Universal manager, Ron Fair, who is associated with acts like Black Eyed Peas and the Pussycat Dolls, is expected to leave his post as chairman of Geffen Records in coming months and move into a new position on “American Idol.” Last year that show signed a distribution deal with Universal, ending a long association with Sony.

Crystal Bowersox stopped by CMT today in Nashville for a performance. Click on the thumb to see the photo. 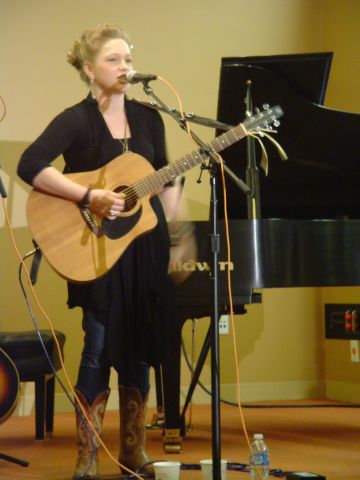 Jennifer Lopez’s ‘On The Floor’ Video: Behind The Scenes

“I play one character where she kind of runs this party, acts like she’s kind of over it, but at the same time loves it and loves this kind of underground kind of party dance culture, ” the new judge told MTV News on the set of her video. “So I got to be wild and crazy, and at the same time I got to be sexy and sweet too.”

Can J.Lo’s star power save a falling Idol?

With a revamped formula, a new panel of judges and exciting new talent pool (from auditions in the louche-fabulous New Jersey) American Idol is back on the air.

While the 10th-season premiere last week had the biggest ratings drop in Idol’s history, producer Nigel Lythgoe is, nonetheless, “thrilled and delighted.”

Media and fans expressed mixed reactions, but that doesn’t seem to matter now with the show in sharp decline, a decline related to two years of overhauling the team of judges, starting with the endearingly distressed Paula Abdul.

Read more at the Globe and Mail

“They both have a lot of experience in the business, and I have a feeling they’re both going to be really straight ahead with people, which is always really helpful, ” season 8 runner-up Adam Lambert tells PEOPLE of the latest additions to the panel.

“It can become very taxing on your ego and your pride when you’re up there and they’re just tearing you down, ” says the pop star. “So having a judge up there that will help build you up and give you positive reinforcement is almost just as powerful as the critiques.”

“I loved it so much, I loved him and was just glued to the television, ” she told FOX411’s Pop Tarts ahead of the premiere of her new thriller “The Ledge” at the Sundance Film Festival in Park City, Utah on Friday. “I had goose bumps all over me, it was amazing.”

Elton John Would Love to Be on Glee, But…

Who wouldn’t die to see Sir Elton John on Glee?!

“I love Glee!” the 63-year-old new father told us at yesterday’s Hollywood premiere of Gnomeo & Juliet.

He hasn’t been invited yet!