Sorry kids. No major spoilers for Glee Episode 5 yet. But I do have a couple of details. At this point, this is all I know. Sorry the info is Blaine/Kurt centric only.

If I had anything else, I would definitely post. And as soon as I DO have something else, I’ll be updating right here, so watch this space.

I’ll be adding to this post as I find out additional details.

UPDATE: A fan who has watched the screener for the episode has posted VERY DETAILED spoilers on their Facebook page. IT’S IN PORTUGUESE, so you will need to click on “Translate This” right above the photo of Kurt and Blaine to read it in English. Also Click HERE if you don’t mind scrolling.

UPDATE: THESE AREN’T MY SPOILERS. But I thought I’d add this. Becca Tobin (Kitty) is in Episode 5 and she posted a page from the script. (SOURCE). The episode is called “The Hurt Locker Part 2”

Sue: Okay, Becky? I’m going to ask you to shut up. You’re ruining this.
Becky: It looks like they don’t even like each other…
Sue: Oh sweet, simple Becky, you have so much to learn about love.
Becky: What are you talking about? I have a hot boyfriend!
Sue: (not listening) So much to learn.
(then) Look at them, Becky. Never have two human beings been so [?] for one another. Yet somehow, hackneyed circumstances and a pudgy former bully have come between them. I need to get these two together in a small space where they’ll be forced to gaze into one another’s eyes once again—and then, Becky, the sticky frottage will commence.

INT. MCKINLEY HIGH — HALLWAY — DAY
Rachel marches up to Kitty, nervously —
Rachel: Your name is Kitty Wilde, you’re named after a Bruce Springsteen song, you don’t trust newspapers because you think they lied about Watergate, you once beat up a mascot at a minor league baseball game for trying to get everyone to do the wave, you list your favorite [?] as Jesus, you prefer Wheat Thins to Triscuits and you rarely wear underwear—I got that last one from Artie.

After Sue’s “informal” Show Choir Invitational has already begun, she announces several rules, including that all teams must have at least twelve members (which New Directions does not) and the competition – which will extend over a three day period – will move forward even in the unlikely event that some of the coaches get kidnapped. Rachel and Kurt redouble their efforts to recruit enough members to allow New Directions to participate, and to put together a performance that doesn’t totally humiliate the team. Despite Rachel’s objections, Kurt suggests they enlist former gleek Kitty Wilde to help them out… a prospect that will require Rachel to swallow her pride, but that leads to Kitty’s invaluable help in putting together the perfect set list and uniting the team.

Meanwhile, Sue – who is still determined to see Kurt and Blaine reunite – pulls out all the stops to enact an elaborate plan; Sam works to recruit Spencer to join the Glee Club, but the gay, aspiring quarterback worries doing so may cost him his standing among the other jocks; and Will and Rachel have a much needed heart-to-heart. 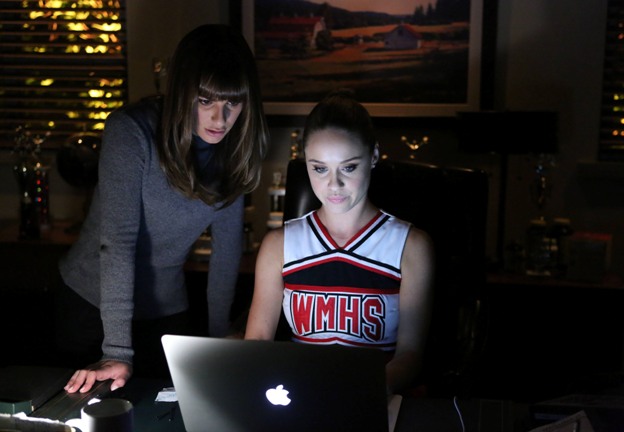