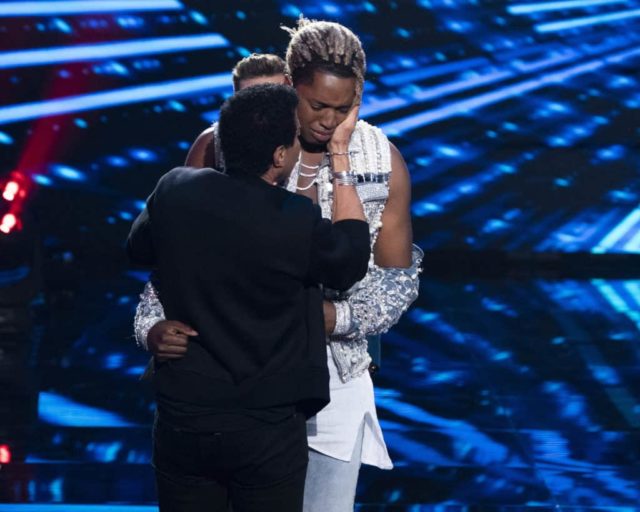 Tonight, the American Idol 2019 Top 10 will be REVEALED. After an overnight vote, SEVEN singers chosen by the fans will advance to the Top 10. The judges Lionel Richie, Katy Perry and Luke Bryan will choose the remaining three as Wildcards.

In any case, each of the Top 14 will sing–either a victory song, or for a chance to earn a spot in the Top 10.

The show kicks off with a recap of last night’s performances–all to the tune of Carrie Underwood’s “Champions.”  “The buzz is,” Ryan says, indulging in the same hyperbole as he did last night, “this is the most talented group in Idol history!” Finally, Ryan intones that familiar phrase: THIS IS AMERICAN IDOL.

WE’RE LIVE FOR THE FIRST TIME THIS SEASON PEOPLE.

Lionel is “not ready for this night. It’s out of our hands.” He seems worried that America won’t do the right thing. Hm. Luke calls last night performances “stellar.” He adds, “We’re in star making mode….” A purple haired Katy claims she has “14 favorites.”

OOH. The victory zone! That’s reserved for the Top 10. The contestants can either sing a new song or reprise a favorite. I see lots of guitars in the holding room…

Madison Vandenburg – You & I by Lady Gaga – Madison had no idea she’d be first. After the nationwide vote. AMERICA VOTES THROUGH MADISON. Oh lord. This live show. Madison is very confused. She’s over in the victory zone. But it’s time for her to sing.  The crew sets up stools so an electric guitarist can play alongside her. The stage opens up as she sings the chorus. Very soulful. Madison seems knocked off her game a bit. She becomes very emotional at the end.

Evelyn Cormier – Dust in the Wind by Kansas – Evelyn is NOT in the Top 10 according to America’s vote. Evelyn Must Sing for her Life!. Is she seriously singing the corny Dust in the Wind? OK then. Still, this is a better fit for her than last night’s atrocious Jimmy Eat World cover. She’s popping her p’s. A few mic lessons might be in order. Again. Her tone is very odd. Lionel claims he’s “in shock.” He promises “this is not the end. This is the beginning of your long career.” Katy thinks she’s “super pro…graceful and beautiful. I think your way to becoming an artist.” Luke speculates that America is split on Evelyn’s very specific niche.  “Don’t let it change who you are,” he warns her.

Walker Burroughs – Love Bug by Jonas Brothers – Bruster’s Ice Cream named a flavor after him called “Good Heavens.” And America Votes Through Walker! Walker is wearing a jaunty hat and accompanying himself on acoustic guitar. My he’s quirky covering a vintage Jonas Brothers song. The electric guitars kick in at the end. I’m still half and half on his vocals. His presentation and arrangements are superior to his vocals, usually. Katy runs on stage with a bucket of Walker’s ice cream flavor. Everybody shares at the judges table. Silliness ensues. What did Katy think of Walker initially? “Harry Potter” she says between bites.

So far, this show is a technical mess.

Riley Thompson – It Must Be Love – Ryan saunters over to the green room to deliver some bad news to Riley. America didn’t vote her through to the Top 10. Riley Must Sing for her Life! I think she has a good chance at a Wildcard. Her vocals are as tentative and half-baked as ever. But she’s young, pretty and has potential. Luke thinks she’s picked some great songs. And he loves her growth. He understands that her confidence might be shaken. Katy advises her to “brush it off her shoulders.” Katy warns folks to vote for their favorites. Lionel advises her “don’t worry about the shot–you will eventually win the game.” After watching her performance back, Riley decided she could have done better. Nevertheless, she’s cheered by her online support.

Alyssa Raghu – The One Who Got Away by Katy Perry – After the nationwide vote…America has not voted Alyssa through to the Top 10. Alyssa Must Sing for Her Life! She covers a Katy song. Obviously Alyssa is using flattery to nab a Wildcard spot. But it’s a risk that could cut both ways. Alyssa possesses a beautiful instrument, but she isn’t connecting with viewers. The contestants all seem on edge tonight. Alyssa is especially emotional. Luke wants to applaud her for the work she’s put in. He calls her a “shining light.” He believes her commitment will see her through. “How dare you,” says Katy, “How dare you sing that song 100 times better than me!” Now Alyssa is really crying. Lionel appreciates her heart and drive.

Wade Cota – Simple Man by Lynyrd Skynyrd – Wade was totally satisfied with his performance last night. After the nationwide vote…America VOTES THROUGH WADE!!!! Ryan jokes “I’m surprised.” Uhm. SO ARE THE REST OF US. And we’re NOT joking. I seriously underestimated Wade’s appeal. “Simple Man” is a good song pick for him. But I simply can’t get past his gravelly, gravelly tone. Clear your throat, dude!

Dimitrius Graham – When the Party’s Over by Billie Eilish – Poor Dimitrius has a look of doom on his face. America did NOT vote him through to the Top 10. Dimitrius Must Sing For His Life. He delivers the song with reverent gospel overtones. Dimitrius is singing as if his life depended on it. If he had sung like that last night, he might have made it through on America’s vote. Luke felt emotionally connected–maybe for the first time. “That’s a big fight you just put up.” Katy felt his heart come through. “It’s not about technicality, it’s about connection.” Lionel realizes there is more to Dimitrius and encourages him to have confidence, “Just believe in you. You were born enough.”

Laci Kaye Booth – As Long as You Follow by Fleetwood Mac – Ryan walks Laci all the way to the stage from the holding room. Why doesn’t he just pull everyone on stage? He can’t believe she covered Blink 182. But he should totally believe that…America Votes Through Laci! She decides to take it easy tonight, with a breezy rendition of middling Fleetwood Mac song. She must have been feeling pretty confident to choose a song with lyrics like “I know I can’t lose…” Not one of my favorite Laci performances. Once she learns she is safe, she proceeds to phone in her performance.

Eddie Island – Use Somebody by Kings of Leon  – After the nationwide vote…America has not put Eddie through to the Top 10. Eddie Must Sing for His Life! The singer picks a much better song for his voice tonight. At his best, there are flashes of vocal ability in Eddie’s performances. There is something about his tone that I like. But he hits pitchy spots and lacks control. This performance is too shouty. Quit screaming at me please. Luke thinks Eddie is choosing the wrong songs. Katy knows what kind of artist he is. “It’s not a singing competition. Yes it’s a singing competition. But it’s an Idol competition.” She thought nerves hurt him last night. Lionel reminds him that the competition is fierce. To sum up: BYE EDDIE NICE KNOWING YOU. A total kiss off from the judges, that was.

Ashley Hess – You Can Feel it All Over by Stevie Wonder – Ashley admits that last night’s performance of “Fix You” was very emotional for her. After the nationwide vote…America did not vote Ashley through to the Top 10. BOOOOOOO. Ashley Must Sing for Her Life. She’s singing an upbeat song. She adds a bunch of whoops and yeahs, and exhorts the audience to “c’mon ya’ll.” Ugh. I love Ashley. But this performance is old fashioned and corny. I still think she deserves a Wildcard, based on her body of work over the season. Luke thought she was comfortable–even though though the judges suggested she stay behind the piano. Katy calls it the best performance from her yet. These gushing comments bode well for Ashley. I hope.

Laine Hardy – Hurricane by Band of Heathens – After the nationwide vote, America Votes Through Laine. Of course they do. For his victory song, Laine sings an ode to New Orleans. It’s another winning performance from Laine, who hasn’t mistepped yet this season. Just crown him now and get it over with! “Smokin Hot!” says Katy. She babbles something about the color of his suit that makes no sense. Lionel notes that he “took us back home to make it.”  Laine’s shirt is a Luke Bryan special, apparently.

Whoo boy. This Top 10 is a total sausage fest so far.

Alejandro Aranda and Uche remain. And of course, America Votes Through Alejandro, Uche Must Sing for His Life.

Alejandro Aranda – Chloe Love (original) –  I love Alejandro’s originals, and this song is no exception. His chiming melodies are beautiful, mesmerizing. More originals please! We cut to a commercial break without remarks from the judges. Running out of time!

Uche – Diamonds by Rihanna – Uche looks absolutely crestfallen. Pour that pain into your performance, brother! This vocal is weird. His phrasing is so odd. But on the other hand, Uche is so entertaining. I can’t imagine this competition without him. WE NEED HIS DIVA GOODNESS. Uche admits that he’s “kind of sad.” He gave last night’s performance everything, yet America rejected him. Ryan gives the sad boy a hug. Luke can’t understand why America doesn’t feel Uche’s electricity. Katy liked that he showed more vocals tonight. What does Lionel think? He takes the stage to give Uche another hug. The audience are on their feet! AW UCHE IS CRYING. “You are a performer! A lot of people can sing. THIS Is an entertainer! And where an entertainer belongs…” Lionel takes him by the arm…

OMG. Lionel walks Uche over to the ZONE OF VICTORY aka The Top 10! The judges are recycling gimmicks, by the way. Last year Katy pulled the exact same stunt sending drag queen, Ada Vox straight to the Top 10 after she closed the show with a powerful rendition of “And I Am Telling You.”

In a chat with Ryan, Bobby reveals he would choose Dimitrius and Riley for the final two spots. I say YES to his first choice, but NO to the second.

The remaining six singers take the stage. KIERAN DIM THE LIGHTS! Luke is leaning on the “sheer emotion” he felt. He chooses Dimitrius Graham. Katy has seen so much growth on this stage. “You better fight for your life,” she advises Alyssa Raghu as she sends her to the Top 10. Singing a Katy song paid off, obvs. Ashley Hess, Evelyn Cormier, Eddie Island and Riley Thompson are eliminated.

So Katy picks one of the teenagers (Alyssa is 17). In my power list post, I brought up Ashley’s age. She’s 27. I was nervous that being close to Idol’s upper age limit would hurt her–older female contestants struggle on singing shows. But on the other hand, America has a diversity issue. Seven of the Top 10 are men. And of the seven voted through by America, only Alejandro is a person of color. To keep the field diverse, it made sense to advance Dimitrius, Uche and Alyssa. Having said that–Dimitrius and Uche deserve their spots in the Top 10 regardless.  Alyssa is a fine singer, but Ashley is a superior artist. The ultimate Top 10 would have America voting Ashley through instead of Wade. And I certainly would have prefered Alyssa over Riley, who is not ready for prime time. Only one disappointment in this Top 10. The results are good, on balance.