This Greensboro NC, contestant’s name is Bucky Covington, and I hear, from a reliable source,  he’s made the Top 44.   I originally posted   his picture in my NC audition recap.   I looked for a NETNAMES registration for all variations of Bucky Covington, but came up empty-handed.   He could be registered under his given name–which I don’t know.   We only caught a short glimpse of him in the episode.   I found an article on line–unfortunately, registration is required to read it.   Bucky  is or was  a member of a band called “Southern Thunder.”   Here’s what the article had to say about Bucky:

Bucky Covington, who also sings lead in some songs, is from Hamlet. He said Southern Thunder is the first country-type band he has played in. “I’ve been in rock bands before, ” he said. Covington is a mechanic by trade. 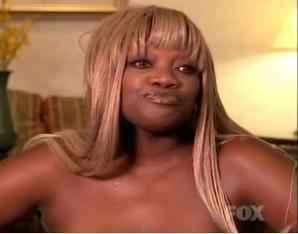 Super-diva Rhonetta Johnson has been all over the  radio in  Greensboro, NC.    Not content with her few minutes of   Idol fame–the girl’s got a story, and dammit, she’s gonna get out there and tell it.    According to Rhonetta,  she and Paula had a huge confrontation during the audition that was edited out–making Paula look perfect and Rhonetta the one that lost control.   Well, I believe there was probably some creative editing,  but one glance at Ronetta’s    rapsheet  will tell ya that it doesn’t take much to push her off the deep end.    She also told the DJs that her only regret was that she didn’t throw  water on Paula when given the chance and that Simon and Randy were super nice.   Thanks to mdawkins for that tidbit.

American Idol, blew out the competition again this week. According to    Hollywood Reporter, “Idol” finished with an average of 34.7 viewers and 15.0/ rating 35 share in the adults 18-49 demographic, good enough to rank as the third highest-rated telecast in the show’s history.   According to Nielsen preliminary estimates, in its final 9:30-10 pm half-hour, viewership peaked at 38.5 million viewers and 17.1/37 in the key demo.    HR  also  reports that the Wednesday edition pulled in 32.1 million viewers and a 12.9 rating/32 share in the adults 10-49 demographic.