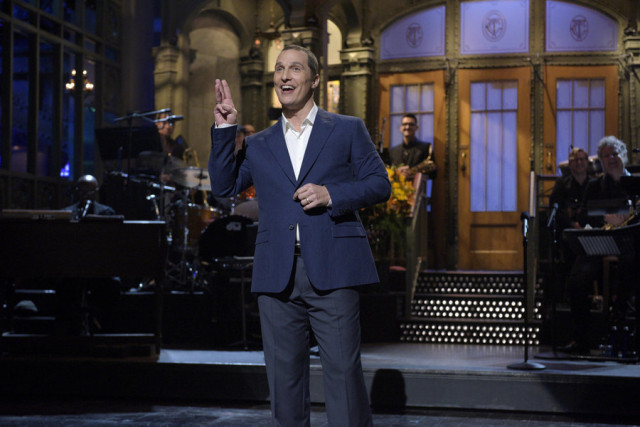 Matthew McConaughey headed a strong episode of Saturday Night Live, made even better by a musical appearance by the sublime Adele (Click to watch).

Speaking of Adele–the digital short of the warring family overcome by peace love and understanding every time an Adele song was played was a smart take on the singers ubiquity and universal appeal. WHO DOES NOT LOVE ADELE!?! Should you Chime in on This is something I ask myself every single damn day as I scroll through my twitter mentions. Game shows parodies that feature Kenan Thompson as the host always win.

McConaughey’s got a screw loose, and I mean that as a compliment. It makes him a perfect SNL host. He’s game for anything. The only thing missing were the Lincoln car commercials.

Watch all the skits below.

Should You Chime In On This?

Contestants Connie (Aidy Bryant), Ned (Matthew McConaughey) and Tristan (Kyle Mooney) consider whether to weigh in on delicate topics on Should You Chime In on This? The answer is almost always and assuredly NO.

Right Side of the Bed with Matthew McConaughey

Buster Littles (Matthew McConaughey) shows Cory (Taran Killam) and Gracelynn Chisholm (Cecily Strong) how to prepare a turkey for Thanksgiving. Have you all ever watched the reality show, Chrisley Knows Best? This is a spot on parody of the couple.