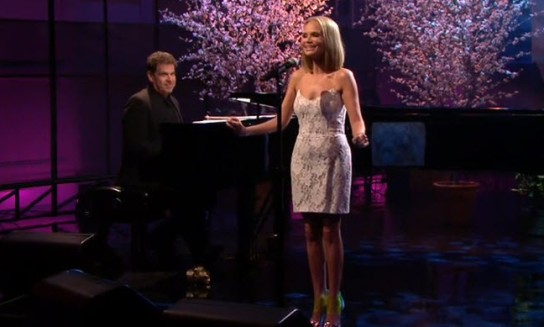 The flawless Kristin Chenoweth was accompanied by American Idol music director, Michael Orland last night on the Tonight Show as she performed a slightly different version of the song “Popular” from the Broadway musical, Wicked.

The new version pokes hilarious fun at Anthony Weiner, currently running for Mayor of New York, who has admitted he continued to sext and text naughty photos to girls who are not his wife, even after the twitter incident that cost him his congressional seat. He refuses to step out of the race, despite calls that he quit over the continuing controversy.

About mj santilli 31093 Articles
Founder and editor of mjsbigblog.com, home of the awesomest fan community on the net. I love cheesy singing shows of all kinds, whether reality or scripted. I adore American Idol, but also love The Voice, Glee, X Factor and more!
Website

Via People Magazine: Kristin Chenoweth is the latest star to be tapped to temporarily fill Paula Abdul’s former seat as an American Idol guest judge, FOX tells PEOPLE exclusively. The actress, who is nominated for