Glee co-creators, Ryan Murphy and Brad Falchuk have been tweeting photos from the set this week. Check out a few spoilery photos below.

The gang have been finishing up Glee 3×13, titled “Diva” and are currently working on the Valentines/Wedding special called “I Do”.

Will and Emma will finally tie the knot in “I Do,” which brings all the Glee graduates back to Lima. As Ryan Murphy recently hinted, two couples will get back together by Valentines day, and one of them is pregnant. Hm.

Kurt will leave new love interest, Adam, in NYC. Which is good, because apparently sparks will fly between him and his ex-boyfriend Blaine. They’ll duet on “I Do” and wind up making out in a car.

Check out the photos from Ryan and Brad. Click to enlarge!

This photo features the McKinley kids strutting their stuff to “Diva” by Beyonce from “Diva” 4×13, scheduled to air on 2/7. Oh. That Ryan Murphy IS SUCH A TROLL. He tweeted this photo with the caption “Come What May.”  He KNOWS that Klaine fans are dying for the couple to duet on the classic song from the Moulin Rouge soundtrack.  But sorry kiddies.    CORRECTION: , Klaine’s duet is “I Just Can’t Get Enough” by Depeche Mode. Maybe  Kurt (Chris Colfer) and Blaine (Darren Criss) will sing “Come What May” s in episode 15, which Ryan revealed will be a movie music episode. ETA: Nevermind! Ryan Murphy reveals that Kurt and Blaine will sing “Come What May” in 4×15.  HOORAY. What the heck? Why are Finn (Cory Monteith) and Rachel (Lea Michele) so, uhm, disheveled? Brad tweeted this photo as a little “I Do” tease.  There has been spoiler talk of a hotel room. With Finchel in it. Hm. Are Jake (Jacob Artist) and Marley (Melissa Benoist) considering taking a big step? Obviously the wedding is taking place at The Lima Holiday Inn or some such thing. And the kids have rented rooms… (Notice Finchel and Klaine are both hanging out in a hotel.) 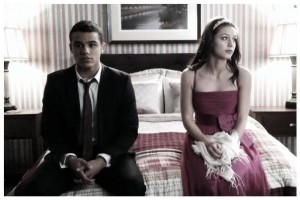 Brad tweeted these next two photos. I have no idea what Blaine (Darren Criss), Tina (Jenna Ushkowitz) and Brittany (Heather Morris) are up to in these photos, or which episode they come from. The balloons are pretty!  And Blaine sitting at a piano is always a welcome sight. I hope Brittany is OK. Ha.