For those keeping score at home, I’ve put together a handy-dandy list of all the spoilers that I’ve posted so far in the past few weeks.   All of these contestants, except Jose Penala and Tora have been registered by Idol through NETNAMES.   Starting tomorrow night, we’ll finally be introduced to these  kids and will soon know their actual status. As the auditions progress, I’ll update the scorecard to mark the hits and misses. Ace Young: Ace has already had a ton of buzz.   Paula Abdul mentions him in this MTV article  as the “one girls are gonna fall in love with.” He’s got a song  on “The Little Vampire” soundtrack.   Here’s a sample.    Fans have  already created a website. Jose Penala:  He doesn’t seem to be registered by idol under Jose Penala, but he shows up on every list and I can’t find an explanation of  how he made the list  in the first place.   I’m going to leave him on with a question mark.  Jose is  27 years old, from San Francisco CA , is married and according to some, has a “great falsetto”.   Judge for yourself–here’s a song sample. He was a member of a group called 6th day. Bobby Bullard:   Folks have been comparing him to a young Luther Vandross.   He’s on the far left in this picture sitting with Heather Cox (rumored, 3rd from the left) and Chris Daughtry (4th from the left)

Folks have been comparing him to a young Luther Vandross.   He’s on the far left in this picture sitting with Heather Cox (rumored, 3rd from the left) and Chris Daughtry (4th from the left) Taylor Hicks:  Ahhhh, the controversy surrounding this contestant.   Is he this guy?   Apparently, yes, even though he looks 40 years old and appears to have a career that’s already in full-swing.   Here are some song samples: Georgia on My Mind, Heart and Soul, Hell of a Day  and Soul Thing.

Ahhhh, the controversy surrounding this contestant.   Is he ?   Apparently, yes, even though he looks 40 years old and appears to have a career that’s already in full-swing.   Here are some song samples: , ,  and .

Patrick Hall:  No information on Patrick, except that Paula Abdul singled him out for Heartthrob status, along with Ace Young, in this MTV Article. Chris Daughtry: The Christian Bald Rocker everybody’s talking about. :).   Member of the band Absent Element.   Here’s a bio, pictures  and some song samples.

Paris Bennett:   The word on teen-aged Paris is that she’s  “fun”–maybe more personality than vocal ability.    Here’s a bio  and a song,

Ayla Brown: The privileged miss from Boston, Mass.   Her mom is a Newscaster and her father is a state Senator.   She’s a star basketball player at the tony private school she attends.   Boston College has awarded her a b-ball scholarship.   Here’s  an article and a few more.   If she’s actually Top 24, I’m bracing myself to never hear the end of it. 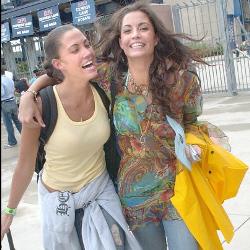 Becky O’Donahue:  Becky has a twin.   They both starred on a twin-themed episode of “Fear Factor.”   She also models and has some acting credits.   She auditioned in Boston, and you can read about her on this blog  which details the audition adventures of Miranda Tozier-Robbins.   That’s Becky on the right with her sister.

Becky has a twin.   They both starred on a twin-themed episode of “Fear Factor.”   She also models and has some acting credits.   She auditioned in Boston, and you can read about her on this  which details the audition adventures of .   That’s Becky on the right with her sister.

Brianna Taylor:  This  contestant is somewhat of a mystery.   A reader left a comment stating that he knew Brianna and that she’s from North Carolina.   Two more readers posted comments swearing that she was from Eastern Pa, but then quickly retracted them.   I found a  post on Survivor Sucks from somebody who claims to be Brianna’s middle school teacher, and she says: “Brianna is 18-19, from Warrington, PA, an R&B style singer…Last I spoke with her she had returned to Boston for the second time of auditions and they told her she was going to Hollywood. She has a very unique appearance. I haven’t heard a word from her since Election Day in November — don’t know if that is a good sign or a bad one!  Brianna’s unique appearance is due to her ethnicity — I would call her biracial, but that may not be accurate. She IS attractive in every way!”   I vote for PA Brianna!   We’ll know for sure soon.

Melissa McGhee:  Apparently she’s a former contestant Miss Florida USA.   And this is supposedly  her MySpace, though I see no mention of her last name anywhere on the page.    Maybe I missed it,  the site is so garish, I could barely read it. eta:  MySpace has been confirmed by Spoilerai who has seen  Melissa’s pageant photos. April Walsh:  April is described as red-haired and quirky.   Every season’s gotta have one.   She also posted on several message boards early in the audition process.   She’s lived in Los Angeles, has a few acting credits and has written two novels.   Here’s a blog  she started. Brooke BarrettSmith:  Christian “rocker”.   She and her sister are in a Christian band called Two4One.   There are some pictures here.

Eugenia Littlejohn:  I’ve seen this  MySpace  posted on several boards  credited to  Eugenia.  However,  I  haven’t seen any evidence that  it belongs to this contestant. Kellie Pickler:  Blonde girl who sings “Broken Wing” in the AI commercials.   Her fans have already created a website  for her.   Wow, that’s one scary-assed picture posted on her site. Mandisa Hundley: A devout Christian, Mandisa  leads worship  and has performed with the Fisk University  Jubilee Singers.   She performed a song on this CD.   Here’s her bio.

A devout Christian, Mandisa  leads worship  and has performed with the .   She performed a song on this .   Here’s her . Megan Bobo:  When I searched Megan’s name, I found tons of stuff.   An overachiever who campaigned for Kerry and worked as a volunteer during the  Democratic convention in 2004, she’s also an activist for the rights of the disabled, women and other minorities.   C-span interviewed  her during the 2004  Iowa Caucus.   She also won a scholarship  and a “youth achievement”  award.

Heather Cox: Heather is a former pageant girl.   It’s rumored that she’s the 3rd girl from the left in this picture taken with Bobby Bullard (1st left) and Chris Daughtry (4th left). Lisa Tucker: This contestant   competed on Star Search in the Jr. category when she was 13 yrs. old.  She didn’t win–apparently some youngin’ named Tiffany blew everybody away. :).    Pictures and sound clips from the show can be found on the Star Search website. Tora:    There is speculation, based  on hints a friend of Tora’s let slip in a radio interview,  that Tora replaced somebody who was disqualified from the Top 24.   She has a  website  with tons of pictures and a bio.   Her fans started  a  site  for her.   She won Tucson Idol. Nobody has been able to find an Idol NETNAMES URL for her.

In the junior category, Stephanie White of Caldwell emerged the winner with a voice that seduced the audience ‘  and the judges ‘  as she sang …At Last and …Lady Marmalade. White, a sophomore communications student at Montclair State University, said she signs up for any competition she can find. She participated last year in New Jersey Idol, winning a preliminary round where she was chosen among 100 competitors at Jersey Gardens Mall in Elizabeth. That win advanced her to a semifinal round at Continental Airlines Arena in Secaucus, where she competed during a Nets game. About the Singin New Jersey competition White said, …Generally what I hope to get out of this is a couple of fans.

Thanks to:   Melissa Tozier-Robbins, Spoilerai, Mkbdiva (from sucks), various people at Idol Forums, slimtainment.com, TWOP, all the kind folks who left comments on my blog, and Grrr and and my pals at the HH for their inside knowledge and Mad Google skills.   I couldn’t have compiled this information without you.