I thought I’d be back sooner, but I’m extremely busy at work right now.   Drat.   So, I’ve capped the Chicago episode here, and will be following up SOON with Denver. :)

I have to say up front, that I really don’t enjoy the audition shows.   First, the novelty has worn off more and more with each passing season.   This year, the bad singers were either too mediocre to be interesting or obviously faking it.   Either way–zzzzzzzzzzzzzz–as far as I’m considered.   Kill me now, but I like hearing the good auditions.   Two hours of caterwauling followed by a quick montage of the folks who made it to Hollywood sorta pisses me off.   I want to watch the good  contestants, especially the ones who wind up in the competition,  from the very beginning.

Having said that.   Last year, the first audition episode was in DC and we were treated to a truly horrifying and amusing rendition of the Star Spangled Banner.   This year, we’re  subjected to a discourse on the significance of American Idol  in American culture.   Uhhm, OK.   A little full of ourselves, are we?  The first 15 minutes were really just a bunch of previews with a litte bit of backstory.   The rest of the show was the usual mix of the good, bad and the ugly.

First, some of the interesting Bad auditions.   That’s not saying much…. Hee. This dude, Derek Dupree, 25.   His XTC shout out (one of my favorite bands EVAH) at the end of his audition was a beutiful, beutiful thing.      A friend must have set him up for that, thinking the Nigel lyric would be cool.   ‘Cause XTC is  so far out of this dude’s demographic in  every single way  possible, it’s unbelievable that he would know who they are–cool if he really does, though.   And that song he sang the second time he came back?   What the hell was that?   Derek was at least slightly amusing amongst a bunch of bad auditions that were NOT. Were these two for real?   COULD THEY BE FOR REAL?   Honestly, I’m thinking Crystal and her mom are both just good actresses putting on a goof.   There aren’t people out in the world this dumb and clueless, are there?   Funny thing–I thought there was actually a good voice behind all the weird over-singing. Eric here was exhibit A:   When parents are Completely and Totally Delusional.   His mom was obviously very taken with her son’s “talents” when she said his rendition of “You’re the One” made her cry–unless she meant his lack of  talent.   As far as the “fight” between Grandma and Simon–at least give a half-assed try to make this sh*t seem real?   I’d say ditto goes for the fake cat-fight between the two divas. This guy sounded like he may have had a good voice–from the two notes Simon let him sing.   A gimmick like this is only good if a contestant’s singing totally sucks.   He reminds me of that chick from last year who auditioned in a cow suit who had a pretty good voice.   Nobody is gonna take ya seriously if ya look like a ‘tard. Heh.   Did I get this right?   Did the judges tell Ukrainian contestant Yulia, who did a pretty bizarrely choreographed  and badly butchered version of “Bohemian Rhapsody” that she’d make a good stripper?   Hee. They put this guy through to Hollywood because….???????   And what do they plan to do with him when he gets there?   I heard that some of the folks who were put through later got phone calls saying “Uhhm, never mind”   I hope David Hoover, from Wexler PA is one of them. FREAKING.  HATE.  TWINS.  HATE.   I thought the two on the right, Derrell and Terrell Brittenum, sorta sucked, but were put through anyway for the gimmick.   The two on the left,   Joshua and Jared,  are only 16 and despite the melisma abuse, were pretty good.   Still, me NO LIKE TWINS.   Just the dumbest gimmick ever….

ETA: Thanks to reader Nonconformist for alterting me to the fact that both Derell and Terrell Brittenum have been registered by Idol through NETNAMES, placing them both on the potential Top 24 list. Why would a self-proclaimed rocker audition with a crappy Celine Dion song?   I suppose it doesn’t matter cause word on the street is that Dental Hygienist Gina Glocksen made it to the top 44/24.   No one has found a domain name for her yet.   Oh, and the hard-on she has for Simon?   Just EWWWW.

Brooke AND Leah Barrettsmith!!!   In all the spoiler talk going around, and the speculation about Brooke  making the top 24, nothing had come up about her sister auditioning with her.   Leah doesn’t have a NETNAMES registration.   Both girls were pimped pretty heavily during the show.   There was a  little segment with the two of them running through cornfields and sh*t, and bragging that their little town is SOOO small and quaint. And, ahem, were these two Christian girls singing “Lady Marmalade” in this segment? ;)   SCANDALOUS.   Hee.   My prediction:   Leah is eliminated in Hollywood while her sister Brooke moves on.   Fun will be had by all as tear-filled drama ensues.   I’ll be sure to cap it!

ETA:   Sister Leah has a MySpace!!!   Thank you very much, elizabeth for posting this!   She’s got quite a different style than sister Brooke, eh?   She’s a little on the punk side and a little on the wild side…   I thought the girls’  vocal talents were pretty equal.   It will be interesting to see the story play out in Hollywood… Mandisa Hundley, another potential Top 24 contestant is a very good singer with a lot of sass.   I’m not surprised she did well. Zachary Smits   is a 17 year old with a smooth crooner voice.   He sang “I’m in the Mood for Love”   Unfortunately, he’ll probably be p’wned by….. David Radford, also 17 who’s got a style very similar to John Stevens from Season 3.   Personally, I think this kid is better.   He’s also got oodles of personality and a cute face.   AND, as it turns out, his name has  been registered by Idol through NETNAMES.   Potential Top 24…How about that! Not On Tonight’s Show, but We Caught Glimpses: 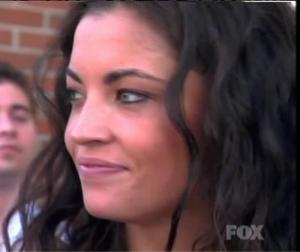 LOOK!   I do believe that’s Becky O’Donahue.   Also previewed were Chris Daughtry and Lisa Tucker who auditioned in Denver.   Heh, and it turns out that the girl who tripped on the escalator in tonight’s episode is April Walsh, also potential Top 24.   She’s also  featured in the Denver episode.

The Road To Hollywood – I totally hate that the most we see of the really good singers during auditions are these lightning-quick montages.   Here are some screen-caps.   Enjoy!