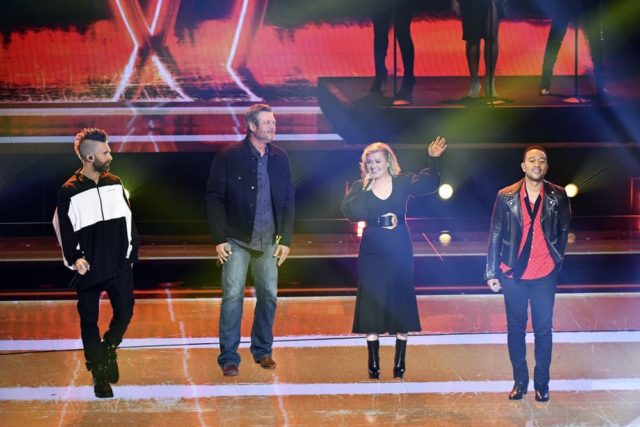 The Voice aired a taped episode last Monday (May 13) instead of going live. That was because the coaches–Adam Levine, Blake Shelton, Kelly Clarkson and John Legend were in New York City for the annual NBC/Universal Upfronts. The team performed a medley of Rolling Stones hits for a crowd of media, network and ad execs., including Jumpin’ Jack Flash, Miss You and Honky Tonk Woman.

The annual Upfronts give networks the opportunity to hype their upcoming television season to advertisers. It’s all about persuading them to spend generously when it’s time to buy commercials and sponsorships. As the networks roll out their biggest stars for the event, it was only fitting that the coaches closed the event.

Don’t worry, next week’s The Voice finale, which airs Monday May 20 and Tuesday May 21 will be 100% live. Check out all the details on the big event HERE. By the end of Tuesday’s show, a NEW The Voice winner will be crowned.

The Voice coaches performance of  “Jumpin Jack Flash,” “Miss You” and “Honky Tonk Woman” is lively, if a little…uh…under rehearsed. Watch it here.