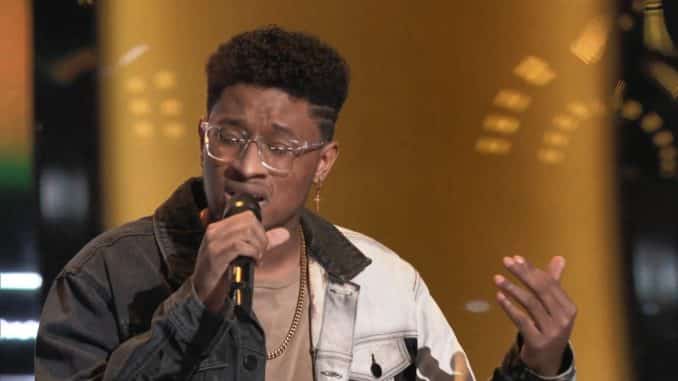 Zae Romeo performs a pretty rendition of Harry Styles’ “Falling” for his The Voice 20 Blind Audition. The emotional performance earns him a four chair turn!

It takes a minute, but Kelly Clarkson turns first, followed by Blake Shelton, Nick Jonas and then finally John Legend.

Next, four The Voice coaches fight over Zae. Nick is the only coach who has never won the show, but attempts to convince Zae that the risk will be worth it. John compliments his vibrato. Kelly says the performance wasn’t perfect, but felt he brought vulnerability to his performance.

Zae has a hard decision to make, but it won’t be revealed until The Voice 20 premiere part two airs on NBC Tuesday March 2 at 9 pm ET/PT (Tonight!)

UPDATE: In his video package, Zae describes how he ended up in foster care at 3 years old along with his siblings. Some homes were OK, others not so much. His family was kept together, and finally were all adopted together when Zae was 6. His adoptive family is “amazing.” But in high school, his self esteem was so low, he left home without telling his parents. He found posters of himself around town and he realized that he was really loved.

In the end, Zae picked Nick Jonas after the coach compared him to Labrynth, and artist he loves.

Zae is a 21 year old singer from McKinney, Texas. He’s a worship leader who studied at Navarro College, but also works at the Muse Mantra School of Music & Arts. Check out his Instagram, Tik Tok and Facebook and Youtube.